The name derives from the following components:

The latest version of DITA (DITA 3.0.1) includes five specialized topic types: Task, Concept, Reference, Glossary Entry, and Troubleshooting. Each of these five topic types is a specialization of a generic Topic type, which contains a title element, a prolog element for metadata, and a body element. The body element contains paragraph, table, and list elements, similar to HTML.

A DITA map is a container for topics used to transform a collection of content into a publication. It gives the topics' sequence and structure. A map can include relationship tables (reltables) that define hyperlinks between topics. Maps can be nested. Maps can reference topics or other maps, and can contain a variety of content types and metadata.

DITA includes extensive metadata elements and attributes, both at topic level and within elements. Conditional text allows filtering or styling content based on attributes for audience, platform, product, and other properties. The conditional processing profile (.ditaval file) is used to identify which values are to be used for conditional processing.

The extensibility of DITA permits organizations to specialize DITA by defining specific information structures and still use standard tools to work with them. The ability to define company-specific information architectures enables companies to use DITA to enrich content with metadata that is meaningful to them, and to enforce company-specific rules on document structure.

DITA content is created as topics, each an individual XML file. Typically, each topic covers a specific subject with a singular intent, for example, a conceptual topic that provides an overview, or a procedural topic that explains how to accomplish a task. Content should be structured to resemble the file structure in which it is contained.

DITA map and topic documents are XML files. As with HTML, any images, video files, or other files that must appear in the output are inserted via reference. Any XML editor or even text editor can be used to write DITA content, depending on the level of support required while authoring. Aids to authoring featured in specialized editors includes WYSIWYG preview rendering, validation, and integration with a DITA processor, like DITA-OT or ditac.

DITA is designed as an end-to-end architecture. In addition to indicating what elements, attributes, and rules are part of the DITA language, the DITA specification includes rules for publishing DITA content in HTML, online Help, print, and other formats.

For example, the DITA specification indicates that if the conref attribute of element A contains a path to element B, the contents of element B will display in the location of element A. DITA-compliant publishing solutions, known as DITA processors, must handle the conref attribute according to the specified behaviour. Rules also exist for processing other rich features such as conditional text, index markers, and topic-to-topic links. Applications that transform DITA content into other formats, and meet the DITA specification's requirements for interpreting DITA markup, are known as DITA processors.

DITA provides support for translation via the localization-atts attribute group. Element attributes can be set to indicate whether the content of the element should be translated. The language of the element content can be specified, as can the writing direction, the index filtering and some terms that are injected when publishing to the final format. A DITA project can be converted to an XLIFF file and back into its original maps and topics, using the DITA-XLIFF Roundtrip Tool for DITA-OT and computer-assisted translation (CAT) tools, like Swordfish Translation Editor or Fluenta DITA Translation Manager, a tool designed to implement the translation workflow suggested by the article "Using XLIFF to Translate DITA Projects" published by the DITA Adoption TC at OASIS.

A variation in authoring and publication platforms across different territories can result in inefficient and costly processes for content generation. Such scenarios have led forward thinking companies to move to the DITA (Darwin Information Typing Architecture) standard. 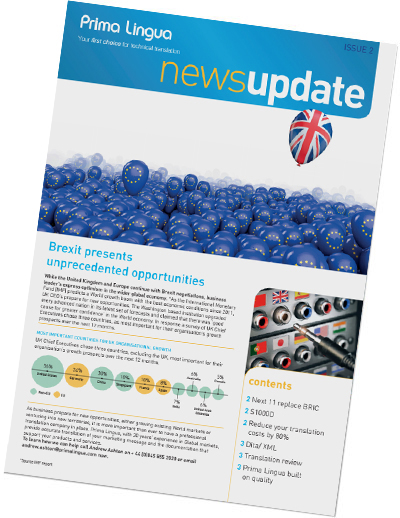 Download a copy of our latest edition of the Prima Lingua newsletter, (just click on the cover image)

Thank you! Your submission has been received!
Oops! Something went wrong while submitting the form.